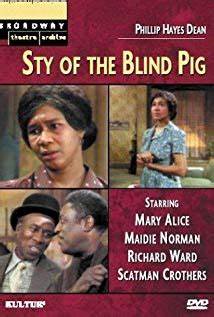 March 26 at 2 p.m. and at 4 p.m.—Sty of the Blind Pig [1974] The Sty of the Blind Pig, ETA Creative Arts Foundation. Phillip Hayes Dean’s play was apparently electrifying in its 1971 New York premiere at the Negro Ensemble Company: it won a Drama Desk Award and a Dramatists Guild Hull-Warner Award. Back in the day, “blind pig” meant a whorehouse. Set in Chicago in 1955, the story takes the audience to the intersection of sexual and religious ecstasy. Alberta, a lonely unmarried woman in her 30s, lives in a soon-to-be-condemned apartment with her pious, overbearing mother, Weedy. Alberta has a gift for delivering ecstatic eulogies at funerals. Weedy’s numbers-playing brother, Uncle Doc, frequently drops by to have a taste of whiskey and take Alberta’s side in the mother-daughter power struggles. One day a blind musician arrives on their doorstep, offering a song in exchange for supper. Alberta accommodates him–again and again. The emotional highlight of the evening comes when Alberta delivers a eulogy in full Pentecostal rapture. In her fevered despair, the words “Take me, Jesus!” are a plea to be transported from this life, which offers only hardship.