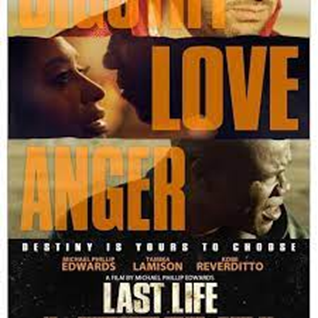 April 21 at 5:30 p.m.—Last Life. [80 minutes]—Rating: TV-14 Some moderate violence; some full frontal nudity. The story of three American spirits as they inhabit 16 different characters moving through time and history, LAST LIFE utilizes three actors to inhabit the journey of three spirits in love as they discover the unifying purpose (and conflicts) of all their lives lived up until this one pivotal moment. This film is a low-budget film with a powerful narrative and tremendous dialog. With only three but absolutely outstanding actors, the film tells a powerful story. The plot reminds me of Octavia Butler’s novel “Wild Seed” about two African spirits moving through several people throughout time. In this film, two Lovers learn they’ve known each other over many lifetimes and that this is their last life together. Leaning somewhat in Buddhist or Hindu directions, the narrative tells us that they don’t have long to live and must clean up the ‘hurts’ between them earned over the millennia and multiple personalities they’ve inhabited together. Travelling through TIME VISIONS, they see themselves as slaves, as officers of the law, and as strangers on a train to heal the rifts between them as they revisit. Unfortunately, they learn they are not alone. A third entity reveals he has been following them through many lives as several different people. He is angry that they are now preparing to leave the earth. The entity does not want them to leave it behind and fights against their harmony. I found the film to be almost like a stage play in its simplicity; consequently, one is much more likely to focus on speech, narrative, and content rather than on spectacle. The film is available on KweliTV and on Tubi.