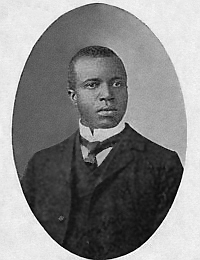 Do you know that Scott Joplin’s 153rd birthday is coming up on November 24? Let’s remember this musical genius with his opera “Treemonisha” on November 18. All ages are welcome. By the way, I had the pleasure of meeting a young lady on Facebook whose name is Tremisha. When I asked about it, she told me: “Yes, I was named after that opera.” It’s always encouraging to know that some people remember this tremendous masterpiece. Come to see it again on the big screen! A word about names of characters in Scott Joplin’s opera “Treemonisha”: Monisha [Hindi name for “Intelligent Person, intellectual], Remus [son of Mars, slain by brother Romulus], Ned [French name: Prosper­ous Protector],  Zodzetrick [Meet him again as “The Joker” in Batman; he is the one who confuses, he is the universal clown, Zanny/Harlequin of the commedia dell’arte, the diabolus (dia + balleinèthrowing across) , Lucy [light—Santa Lucia], Andy [English: Manly, Warrior], Luddud [from Eng­lish “Ludd” meaning “servant”], Cephus [Cepheus, King of ancient Ethiopia], Simon [Hebrew: The Listener], Parson Alltalk [‘nuff said]—This opera is not a “ragtime” opera; it is a very Romantic [Ro­manticism as a form of ideology: Sturm und Drang, Rebellion, Change] opera. Scott Joplin’s teacher was one Julius Weiss, Music Professor from the Kingdom of Saxony. Are you intrigued yet? I hope so. We will have this universal genius’s sole surviving opera at AACS on screen on November 18 at 4 p.m.  Scott Joplin never saw a performance; we here at AACS have a record of the only performance of the opera in 1972 by the Grand Opera of Houston. Scott received the Pulitzer Prize for Music in 1976 post­humously for this opera. And NO! It’s not ragtime; it’s solidly classical opera fit to an Afro-American mythology.  The great opera singer Jessye Mae Norman, whose first role was to sing Elisabeth in Wagner’s Tannhäuser—much to the chagrin of German purists who did not expect a Black Elisabeth–expressed great regret that she never had enough resources to produce this opera.

Julius Weiss (born in 1840 or 1841) was a European-born American Jewish music professor, best known for being the first piano teacher of Scott Joplin, who became known as “the king of ragtime.” Weiss is credited with recognizing Joplin’s talent and giving him music and piano lessons as a child, introducing him to European music and models. Weiss emigrated to the US from Saxony about 1870 and worked for a time in upstate New York. In 1877 he settled in Texarkana, Texas, where he worked as a schoolteacher, tutor, and music teacher. He taught Joplin music and other subjects free of cost for several years, beginning when the boy was eleven years old. Joplin’s parents, a former slave and a domestic worker, had no way to pay for private lessons. Weiss came from Saxony; the Kingdom of Saxony was integrative of Jews by way of an edict that specified that Christians and Jews were to be equals before court (1851).

Note: In German Romantic opera, the libretti (opera texts) were often based on German legends and folklore, with the mystery of nature and supernatural forces serving to intensify dramatic expression.  The recitatives and arias in German Romantic operas were distinct forms and were sometimes based on folk song or melodies in folk style.  “Melodrama” (instrumentally accompanied speech), sometimes an independent form, was used for special effects.  Two other traits of the music drama were exhibited to some degree in the German romantic opera.  The orchestra became a powerful instrument in creating atmosphere, moods, and even bits of realism.  There was also a prototype of the music dramas’ “leitmotif,” in which particular instruments and melodies are used to identify and characterize individuals.

In 1907, Joplin moved to New York City, which he believed was the best place to find a producer for a new opera. After his move to New York, Joplin met Lottie Stokes, whom he married in 1909.[40] In 1911, unable to find a publisher, Joplin undertook the financial burden of publishing Treemonisha himself in piano-vocal format. In 1915, as a last-ditch effort to see it performed, he invited a small audience to hear it at a rehearsal hall in Harlem. Poorly staged and with only Joplin on piano accompaniment, it was “a miserable failure” to a public not ready for “crude” black musical forms—so different from the European grand opera of that time. The audience, including potential backers, was indifferent and walked out. Scott writes that “after a disastrous single performance … Joplin suffered a breakdown. He was bankrupt, discouraged, and worn out.” He concludes that few American artists of his generation faced such obstacles: “Treemonisha went unnoticed and unreviewed, largely because Joplin had abandoned commercial music in favor of art music, a field closed to African Americans.” In fact, it was not until the 1970s that the opera received a full theatrical staging.

In 1914, Joplin and Lottie self-published his “Magnetic Rag” as the Scott Joplin Music Company, which he had formed the previous December. Biographer Vera Brodsky Lawrence speculates that Joplin was aware of his advancing deterioration due to syphilis and was “…consciously racing against time.” In her sleeve notes on the 1992 Deutsche Grammophon release of Treemonisha she notes that he “…plunged feverishly into the task of orchestrating his opera, day and night, with his friend Sam Patterson standing by to copy out the parts, page by page, as each page of the full score was completed.”

The score to his first opera A Guest of Honor was confiscated in 1903 with his belongings for non-payment of bills and is now considered lost.

Note that I also have the synopsis and the libretto for the opera. If you wish to have copies, please request them by email from me, Reinhold Schlieper at reinholdschlieper@yahoo.com