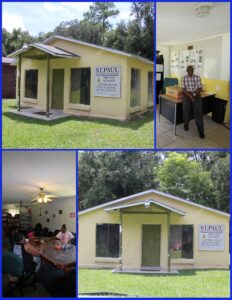 The Espanola Schoolhouse located at 98 Knox Jones Avenue, Bunnell was added to the National Register of Historic Places on July 22, 2020. It is Flagler County’s first landmark directly associated with black history to receive national recognition for its historical significance in the areas of Education and Black Ethnic Heritage.

The Espanola Schoolhouse is the last standing one-room schoolhouse in Flagler County. It went into operation in 1950 during the Jim Crow era as a segregated black-only Flagler County public school. It operated from 1950 to 1957 as an elementary school, first through eighth grades, and accommodated around thirty students per school year from Espanola and the nearby communities of Neoga and Bimini. During its operation as a segregated black-only Flagler County public elementary school it did have electricity. However, it did not have running water or a bathroom inside the building. Located in the backyard of the building a hand pump provided water and an outhouse provided toilet facilities for the students, teacher and teacher aides. Some children with no access to automated transportation walked more than six miles per day to attend this school.

From 1958 to 1970, the Espanola Schoolhouse operated as an independent kindergarten for the Espanola area. From 1971 to 2001, the building was used as a storage facility and gradually fell into disrepair. Fortunately, a community renovation project began in 2001 led by Rev. Frank Giddens and Queenie Jackson. Considerable exterior and interior repairs were accomplished including the installation of air conditioning and the addition of a bathroom inside the building, which enabled it to be open to the public as a clubhouse.

The Espanola Schoolhouse is currently owned by the Trustees of the St. Paul Missionary Baptist Church and now serves the Espanola community as the St. Paul Youth Center, which is used for academic tutoring and a social center and summer camp for the area’s disadvantaged youth.

About the Author: Ralph Lightfoot