When I was a young student, I loved American History like I loved playing baseball, or playing drums.  Studying history in school was never a chore for me, it was fun.  As an adult, I have come to love and appreciate the history of African countries even more than the history of America, but in my youth, American History was all I was fed, so I devoured it.

My eighth grade year in the public school system of Columbus County, North Carolina was completely devoted to the study of North Carolina’s History.  To graduate, you were required to demonstrate a broad knowledge of that history, ranging from subjects such as knowing the name of the first child born in North Carolina, to knowing the county seats for all 100 North Carolina counties.  While I was not an academic, I knew history, especially North Carolina history, or so I thought!

It was only a few years ago, as I was doing research for my book, All I Need, that I realized, I didn’t know North Carolina history at all.  I only knew what the public school system of Columbus County N.C. wanted me to know.  I discovered events pivotal to American history that happened in N.C., and I had never read about, nor had I ever heard them discussed.  The most egregious eradication of historical truth happened on November 10, 1898.  White supremacy advocates, claiming that they would not be ruled by (n-word), overthrew the elected city government, and murdered at least 65 Black men in the streets of Wilmington, North Carolina.   Prominent Blacks who were not murdered, had their homes and businesses looted and burned.  They were also banished from the city, never to return.  In addition, women and children, as well as Wilmington’s entire Black community were driven into hiding in the swamps outside of Wilmington where even more died. 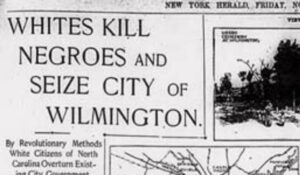 You would think that a lover of history who spent a whole year studying N.C. history, would know about such a momentous event that happened 43 miles from where he was born and grew up!  That must have been the history that North Carolina didn’t want me to know!